We take your safety seriously. Click here to learn about the precautions we are taking with Covid-19

Installation Times: What to Expect From Artificial Turf 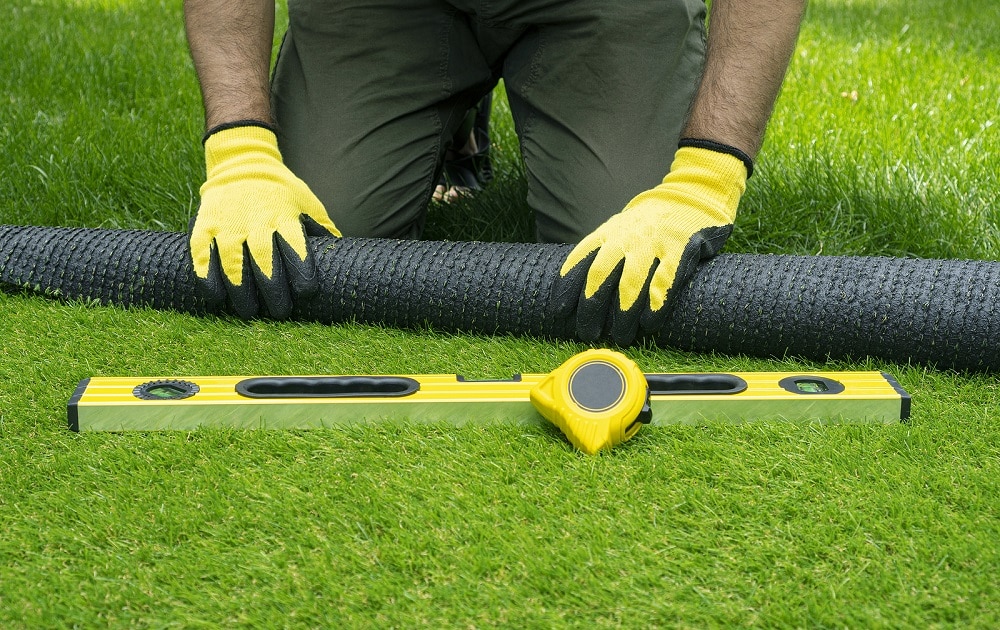 Artificial turf is growing in popularity. It’s an attractive, low-maintenance lawn option that is good for the environment and the general state of your outdoor space. Since so many people are investing in artificial turf, some common questions arise. How long does it take to install the turf? To answer that question, we can look at a detailed timeline that goes over all of the major steps of installation.

Installing the turf itself is the second step on this list, but in terms of the total process, it comes near the end. The bulk of the labor occurs in the preparation phase. There are a few things that need to be done to the ground before the turf can go down.

First, the ground is cleared. Existing grass and plant life have to be removed and sterilized. Any plants left around will ultimately grow through the turf and ruin the whole thing. That’s no good, so all of the plant life must be removed from the area that will be turfed.

On top of that, the ground is excavated. Most turfs need around four inches of excavation. Removing this much dirt allows for thorough sterilization of the area. It is also important to prepare the ground itself.

Once the excavation is finished, the area is leveled and built up for the turf. Ultimately, the turf is going to be even with the ground (in most designs). That means the excavated region has to be built back up. This is done in several layers that are packed and filled. The process is repeated until the ground is level and ready for the turf.

Finally, a weed barrier is placed to ensure that the installed grass remains artificial in the future.

In all, preparation involves the most intense labor in the whole process. You can expect it to take anywhere from 5 to 25 hours of labor for most residential lawns. For large-scale commercial lawns, the time can increase considerably. It’s all about the size of the turf.

Now that the ground is prepared, we can lay the turf. In this step, the primary components of the turf are laid across the designated area.

In order to do that, the turf first has to be unrolled. Most turf materials need to sit for about an hour. This allows them to soften so they can be properly installed.

When that part is finished, the grass is cut and laid as designed. The timing for this portion of the process usually takes a couple of hours. Small turf installations can be laid in a little over an hour. Larger turf installations will take multiple hours. Fields of turf will take days.

After the grass is laid and secured, it needs infill. Infill is what gives the turf its texture underfoot. It also weighs the turf down to ensure that it won’t get caught up in the wind.

The infill process will vary according to the turf you select. That can impact the time devoted to this process. Regardless, the infill is added and spread as needed. This usually takes a minimum of 30 minutes. But it can take a few hours, depending on the project.

Typically, a power brush is used in the final step of spreading infill. It helps get an even distribution across the turf. Brushing also removes debris and grooms the blades of the grass to make them look as nice as possible.

When the infill is finished, final touches are added to the project to get the utmost out of the turf. Overall, you can expect power brushing to take an hour or more.

For the entire process, you’re typically looking at 8 to 30 total hours of labor to do the work. As stated above, the timing depends on the turf chosen and the area being covered. If you have a large area, we can increase the size of the work crew so that the project doesn’t take all week. Most installations can be done in one to three days. Commercial installations can take longer as the square footage gets high enough to dwarf traditional residential lawn sizes.

You can have the turf you want, and the installation process does not need to be painful. To plan a turf installation that works with your schedule and lifestyle, contact LawnPop. We’ll discuss turf options and come to take a look at your lawn. We can give you a time estimate that lets you know exactly what to expect. When you’re ready, we’ll install your turf, and you’ll have an upgraded lawn that you can enjoy for many years.